Recently, MeituEve teamed up with Chinese Academy of Sciences to jointly release two major scientific research achievements with regards to "Genome-wide association study of the nasolabial fold identified novel variants related to genes that also affect facial morphology" and "Quantifying facial skin aging signs by deep learning-based algorithm". These were selected for publication in the Society for Investigative Dermatology (SID) and the International Society for Biophysics and Imaging of the Skin (ISBS), respectively. Based on its technological partnership with the Chinese Academy of Sciences, MeituEve has taken skin imaging technology that had previously been applied in the commercial field and has upgraded it for use in highly specialized fields such as genetic research and segmentation algorithms, and has received a high degree of recognition from the scientific community for its accurate AI facial aging quantification technology. MeituEve's skin analysis technology is not just a marketing tool for driving sales conversions, but is also a powerful assistant for verifying dermatological research.

On May 18th, the SID held its 80th annual meeting in Portland, Oregon, USA. Since its founding in 1937, the SID has been dedicated to promoting the development related to skin health and disease through education, advocacy, and the exchange of scientific information, bringing together thousands of basic and clinical dermatologists from around the world each year as it has become one of the most authoritative international academic societies in the field of dermatology. During this year's SID conference, the topic researched by MeituEve in partnership with Chinese Academy of Sciences had the honor of being selected to participate in academic sharing, receiving a high degree of recognition from experts in the field of dermatology.

During the conference, MeituEve leveraged its expertise in deep learning and image analysis to precisely and accurately detect and quantify facial aging. On this basis, MeituEve once again partnered with Dr. Sijia Wang, a principal investigator at the Shanghai Institute of Nutrition and Health of Chinese Academy of Sciences to jointly release their research achievements regarding "Genome-wide association study of the nasolabial fold identified novel variants related to genes that also affect facial morphology".

In this study, MeituEve used AI technology to break through previous methods of classifying and quantifying nasolabial folds, using a scoring system based on a scale from 0 to 100 to precisely quantify the nasolabial fold phenotypes of 12,980 test subjects (Figure a). Based on these precise and accurate quantitative values of nasolabial folds and on the genomic data of test subjects, the research team conducted a genome-wide association study (GWAS) to successfully identify genetic loci that are highly associated with nasolabial folds (Figure b). According to previously published research, these genetic loci are highly correlated with intermediate facial development morphology.

To better understand the relationship between nasolabial folds and facial morphological structures, the research team also collected and generated 3D data for the faces of the test subjects. It can be seen that the “nose-mouth area” in the middle of the face is more prominent in subjects with severe nasolabial folds (highlighted in red). Also, previous anatomical studies on nasolabial folds enhanced the findings of this study.

In this study, novel genes associated with nasolabial folds were found and a strong relationship between skin aging and 3D facial structures was confirmed through genetic research for the first time. This study also showed that MeituEve has a unique advantage in image recognition and grading algorithms for skin analysis. For the future, our hope is that advanced technology will continue to help with even more of the research and applications related to skin imaging and facial aging.

In addition, during the 2022 ISBS conference held in early June, MeituEve research team was invited to give an oral presentation at the conference.  (ISBS) focuses on engineering technology research and development in the field of skin, which includes the development, use, and dissemination of invasive and non-invasive technologies for human skin. It has extensive influence in the fields of dermatological testing, skin care products, and the research and development of medical devices for skin.

Back in 2018, MeituEve published a research paper at the ISIC conference, after which its algorithm was cited many times and became highly recognized in the field of computer image recognition. During this study, the Eve Research & Innovation Center (ERIC) improved and advanced its algorithm many times, significantly expanding the detection dimensions and upgrading the fineness of detection based on accurate skin detection, which resulted in a huge improvement in the effectiveness of skin analysis. This study found that the analysis results of MeituEve's algorithm, which is powered by deep learning, represented a significant improvement over conventional skin analysis devices (the blue data in the graphs are MeituEve's analysis results).

In addition, in terms of the fineness, stability, and accuracy of skin analysis, the MeituEve M outperformed commonly-used brand devices in the industry (the chart below shows the conventional detection dimensions on the left, while the right is MeituEve's). This technology will lead to more specific and accurate quantitative results in the fields of skin imaging research and analysis service development. 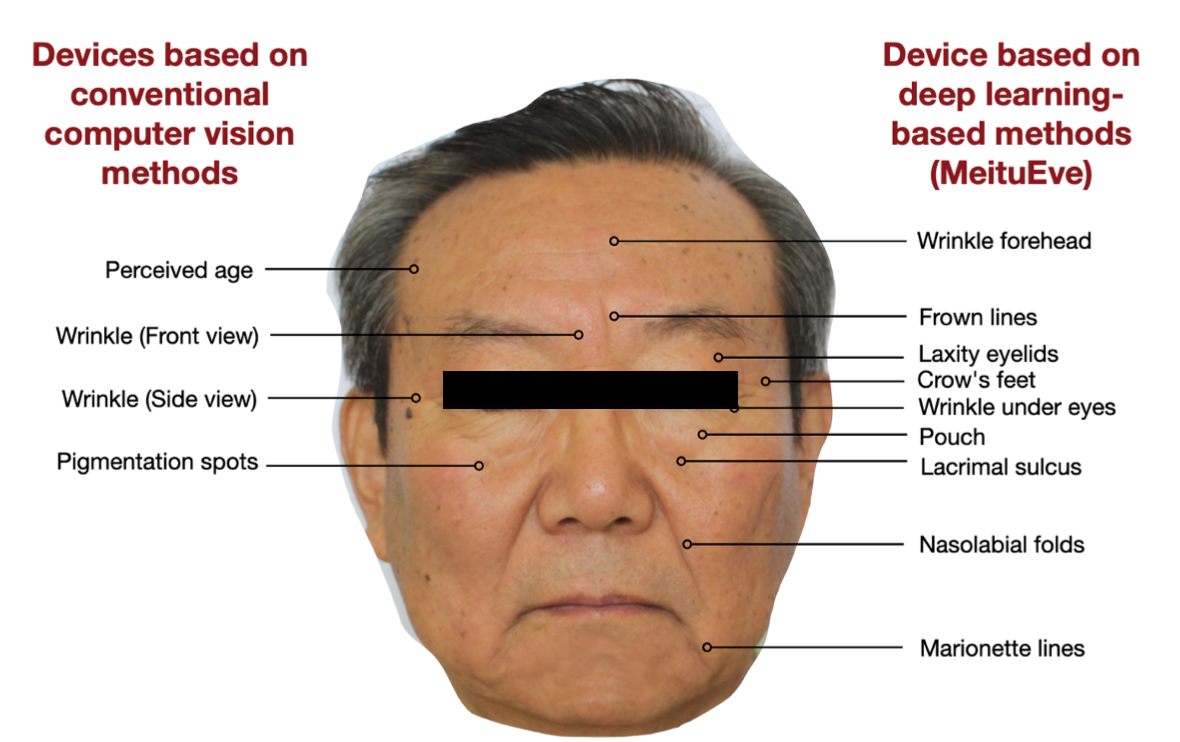 During this year's ISBS conference, the MeituEve research team also gave a detailed introduction of the MeituEve V, the most cutting-edge skin analyzer, to international experts attending the conference. This analyzer uses a unique, high-precision (differences of 0.5mm or less), 3D multi-view registration-type sculpting algorithm, structured light volume displacement tracking, and other technology to intuitively present and quantify soft tissue displacement and changes in facial contours caused by aging. Using deep learning algorithms and advanced 3D analysis technology. In the future, the problem of quantitative skin analysis will be solved more efficiently.